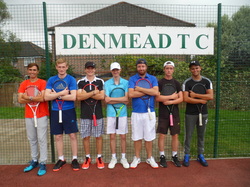 Our Mens a team enjoyed a quadruple success this summer by winning all the Divisions in which  they played. It all started back in May when they won the Hants & IOW Aegon Division 4. Next up in early August was the Babolat Hants & IOW doubles Division 3a. Then on 21st August they clinched the Portsmouth Division 2 title. Lastly on 7th September they won the East Hants Division 1 league for the second year in a row. In all, 11 different players played for the team and it particularly pleasing that all but one were a product of the Club's junior system.
Posted Sept 2016
Successful Summer for our Junior Teams
Our junior teams had a very good Summer in the Aegon Hampshire & IOW tennis league. Our 10U team won their division in a play-off final while the 14U boys team both won their  division. The 12U boys team were runners-up in the play-off final in their league.
As is traditional now, when a junior team wins their league  they are treated to a meal out in a local restaurant. The photo on the left shows the 14U team at their meal.
Posted July 2016
2015/16 Winter of Content for Denmead's Teams
Denmead had a successful winter season with three teams winning their respective divisions. Pride of place goes to the Mixed team who won the East Hants Division 1 for the first time in the club's history. The team was spearheaded by 14 year-old  Chloe Efford who won 37 out of the 40 sets she played along with Aaronn Blackman who won 27 out of 28 sets he played. The Mens A team also won East Hants Division 1 and now

We held our most successful Summer Camp yet with 146 different children attending during the 2 weeks of the camps. An average of 39 children attended each morning of the camps for 4-11 year olds and an average of 18 attending the afternoon sessions for those aged 12 and over. The total attendance figure over the 2 weeks was 493. There were 40 participants who were new to the club. Thanks should go to all the coaches and tennis leaders who helped make it an enjoyable fortnight.
Posted August 2016
Great British Tennis Weekend
We held our Great British Tennis Weekend for juniors on Saturday 16th July. 110 juniors attended throughout the day including sixty age 10 and under. Sessions included coaching, fun games and mini matches. The weather was great all day and many of the participants have signed up for our Summer Camps Posted July 2016
Mens Team Win East Hants Division 1
The Mens team won the East Hants Summer League for the first time in our history with a 5-3 win over Steep. They won all 10 matches that they played. This was thanks in no small way to James Sillence and Aaronn Blackman who each won 39 out of the 40 sets they played. It is particularly pleasing as all 9 players used are a product of the Denmead junior system.
Posted September 2015
Mens Team success
The Mens A team have won the East Hants Winter Division 1 for the third year in a row. The team was captained by Adam Smith and top performers were James Sillence and Aaronn Blackman. It is a measure of the club's junior programme that all the players came through the junior system.
Posted April 2015
14U Team Win Division 2
Congratulations to our 14U team for winning the Aegon Hants & IOW Division 2 this Summer. Even more impressive was that they won it without losing a set. Well done to the 5 players involved: Alec Joad, Toby Howells, Adam Caswell, Tom Ferris and Edward Moger.
Posted July 2015